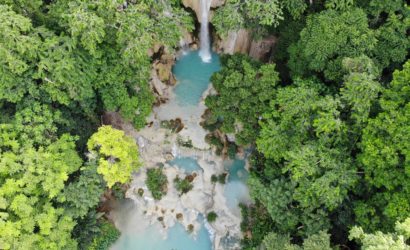 The Royal Palace Museum in Luang Prabang (also known as “Haw Kham” or “Golden Hall”) was once Laos’ Royal Palace. It was built in 1904 during the French colonial era for King Sisavang Vong and his family. The site for the palace was chosen so that official visitors to Luang Prabang could disembark from their river voyages directly below the palace and be received there. After the death of King Sisavang Vong, the Crown Prince Savang Vatthana and his family were the last to occupy the grounds. In 1975, the monarchy was overthrown by the communists and the royal family were taken to re-education camps.

Wat Wisunarat is Luang Prabang’s oldest temple and was once home to the Prabang Buddhas. The history of the temple is colourful with it being originally crafted from wood before being burned by Black Haw riders in 1887. The Black Haw riders were part of the Black Flag military rebel group led by a Chinese commander at the end of the 1880s. Post invasion, it was rebuilt using stucco and brick and retains some original pieces including a stupa that was created in 1503 along with some other small Buddha icons although many were stolen during the Haw raid.

Wat Xieng Thong (Lao: ວັດຊຽງທອງ; “Temple of the Golden City”) is a Buddhist temple (wat) on the northern tip of the peninsula of Luang Phrabang, Laos. Wat Xieng Thong is one of the most important of Lao monasteries and remains a significant monument to the spirit of religion, royalty and traditional art. There are over 20 structures on the grounds including a sim, shrines, pavilions and residences, in addition to its gardens of flowers, ornamental shrubs, and trees.